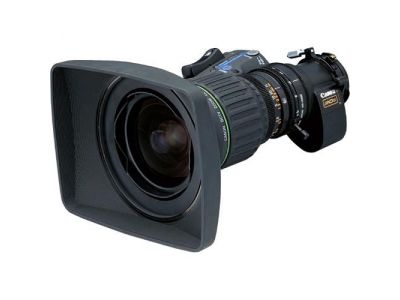 The Canon e-HDxs HJ11ex4.7B-WRSE is an 11x super-wide-angle 2/3 lens built to offer high performance in HDTV news gathering. The lens is lightweight and can be relied upon under harsh conditions. Additionally, its equipped with features such as internal focus and shuttle-shot programmable positioning. The focal-length range is 4.7-52mm with a minimum object distance of 2 (0.6 m). This lens also has a crossover element for preserving image angle while in 4:3 aspect ratio mode as well as a 2x extender for doubling focal length.

Shuttle-Shot Technology
The lens has added capability when zooming, using the shuttle-shot switch. At the touch of a button the lens can move to a pre-programmed point, going back and forth. This can also be used creatively while providing a no hassle way of verifying focus.

4:3 Crossover System
Achieving 4:3 aspect ratios from a 16:9 CCD is usually performed by cutting off the sides of the imager, effectively making the minimum focal length more telephoto. Canons 4:3 crossover technology preserves the same picture by shortening the original focal length. Shots in standard 4:3 hold the same image angles as if shot in 16:9.

Integral 2x Extender
For instant close-up images the lens has a switch that inserts an element that doubles the focal length at any point in the zoom range. Instead of using the zoom function the extender gives immediate close up images.