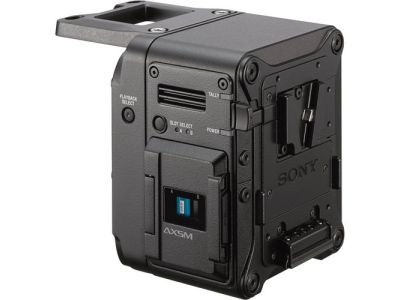 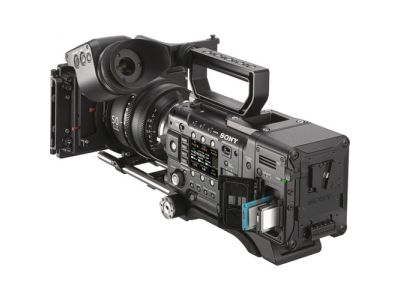 The Sony AXS-R7 4K RAW Recorder seamlessly attaches to the high-end PMW-F55 and F5 CineAlta cameras, speeding up the 4K production workflow. This 16-bit linear recorder offers 4K RAW recording up to 120 fps and 60 fps for the PMW-F55 and F5 cameras respectively. For shooting at higher frame rates, the recorder captures 2K RAW at up to 240 fps, for playback with 10x super slow motion. This recorder also offers 4K RAW/X-OCN cache recordings up to 30 seconds while in standby mode (target storage time at 23.98p, approximately).

This AXS-R7 recorder is compatible with the high-speed slim AXS A series memory cards (available separately). It features dual memory card slots for extra security and to extend recording times. Built to work in challenging field conditions, the recorder comes with a rugged, all-metal casing with robust attachment to the camera body and a sealed ventilation system that is dust- and splash-resistant. It is suitable for feature film, television commercial, reality, documentary, and wildlife cinematographers who require continuous, full-resolution 4K RAW recording from their F55 and F5 cameras.

30-Second RAW Cache Recording
The AXS-R7 recorder offers RAW/X-OCN cache recording at 23.98p for approximately up to 30 seconds while in standby mode, an important feature in documentary or wildlife production where capturing spontaneous action is required. The cache recording time varies based on the frame rate and recording mode.

From Power Up to Record in 0.5 Seconds
When the unit is powered on by pushing the REC button, the Quick Rec mode gets activated. This mode accelerates the power on process and the recorder starts recording in about 0.5 seconds.

Durable Dust- and Splash-Resistant Metal Design
The AXS-R7 has a rugged, durable metal body built to work in challenging field conditions. It is dust- and splash-resistant, with electric parts and the ventilation shaft separated by a metal filter to prevent the entry of dust and water. Connection between the camera and the recorder is secured through a large quick-release top bracket that accepts four widely spaced 1/4 screws.

Dual Memory Card Slots Support High-Speed Slim AXS A Series
The AXS-R7 recorder features dual memory card slots and works with sleek, high-capacity, high-speed AXSM A series S48 memory cards (1TB and 512GB), which are designed to support the write speeds required for 4K RAW/X-OCN 120 fps recordings (only when used with the PMW-F55 camera). It also works with the AXS A series S24 slim cards (blue trim, 1TB, 512GB, and 256GB capacity) for recording 4K RAW up to 60 fps and 2K RAW up to 240 fps. By using Sonys free RAW Viewer application, the recorded files can easily be played back and checked on a PC or MAC.